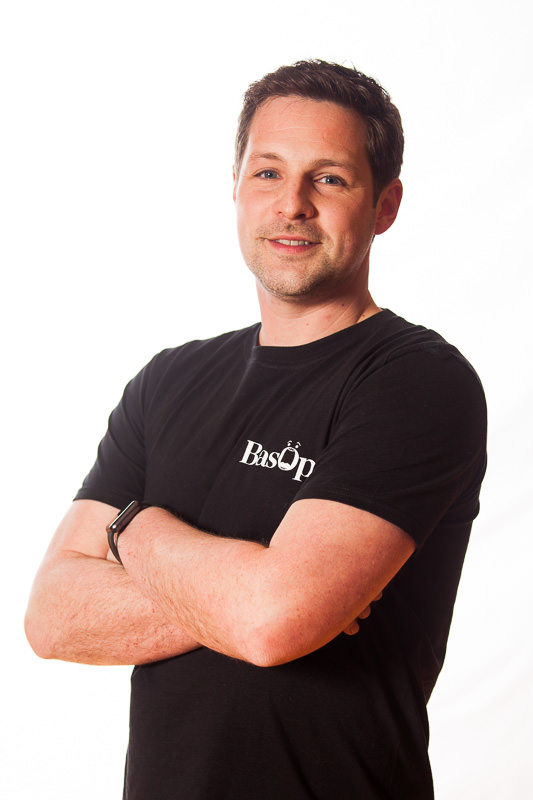 Mathew started performing at the age of 4 in dance festivals throughout the South East. Between the ages of 4-18 he studied Ballet, Tap, Modern, Jazz and National Dance & in 1999 graduated with a B-TEC National Diploma in Performing Arts. Since then he has performed several leading roles including Arthur Kipps ‘Half A Sixpence’, Perchik in ‘Fiddler On The Roof’, Sky Masterson ‘Guys & Dolls’, Will Parker ‘Oklahoma’ and many others. Before moving to Essex, Mathew was a member of TWODS in Kent, performing in over 20 of their shows & most recently he has performed with TOPS playing roles such as Lun Tha in ‘The King & I’, Lt Danny Gilmartin in ‘Calamity Jane’ & Ching Ho in ‘Thoroughly Modern Millie’.
Mathew owns his own successful gardening company ‘Outside’ with work spanning between Kent and Essex. He lives with his wife Victoria and has 2 beautiful daughters Rosi 16 and Olivia 11 and his handsome son Joseph 2, of whom he is very proud.   Mathew’s first show with BasOp was playing the role of Sky Masterson in the 2016 production of ‘Guys and Dolls’ some 18 years after playing the role the first time. Mathew was especially under pressure this time round, seeing as his wife was the director and knows that should he go wrong, he will be in serious trouble.  Another year has past and the couple have teamed up again with Mathew once again playing Perchik in the upcoming production of ‘Fiddler on the roof’ with his wife Vikki once again directing; Mathew is sure to put on his best performance.